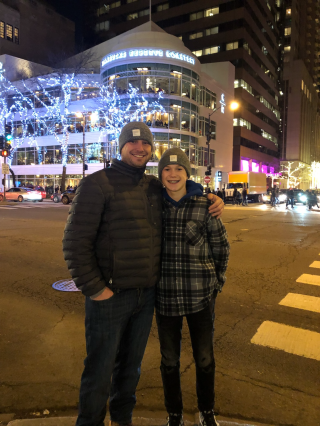 Ryan Borde and his son Ty

Ryan Borde is the chief operating officer of Carcraft Auto Appearance Center where he oversees the day-to-day operations of the detail center, full service car wash and adjacent Carcraft Chevron gas station. After being gone for eight years, Ryan returned to Carcraft in April 2012. He has been instrumental in increasing Carcraft's presence on the internet, designing Carcraft's website (carcraftalbany.com), helping design Carcraft's first ever official logo, and getting the company involved in more civic activities and the Albany Chamber of Commerce.

A 2004 graduate of Oregon State University, Ryan played baseball at Linn-Benton Community College for two seasons where he earned all-league honors as an outfielder. He then transferred to Pacific Lutheran University and played football and baseball, and helped the Lutes to the national playoffs and top-10 national finishes in football during the 2000 and 2001 seasons. As a senior he was named a CoSIDA Academic All-District VIII selection as a linebacker.

From 2005-06, Ryan served as an assistant football coach and assistant media relations director at Willamette University. He then moved to Seattle where he worked in the athletic communications office at the University of Washington and he also earned his Masters of Education degree in Intercollegiate Athletic Leadership in June 2008. Ryan then accepted a position as the assistant media relations director in the athletic department at Portland State University, where he worked from 2008-2012.

Ryan grew up working for his dad and uncle and has over 20 years of experience in the car washing and auto detailing industries. He has a vast wealth of knowledge related to car washing, auto detailing and the appearance of vehicles. Every spring, Ryan travels to "The Car Wash Show" convention hosted by the International Carwash Association to learn about the most up-to-date techniques and equipment in the industry.

Ryan has one son, Ty (16) and lives in Stayton. He is also an assistant football coach at Stayton High School. He is an avid traveler and fan of Oregon State athletics. He enjoys spending time with his son, coaching his sons sports teams, running, reading, cooking and barbecuing on his Traeger wood pellet grill.