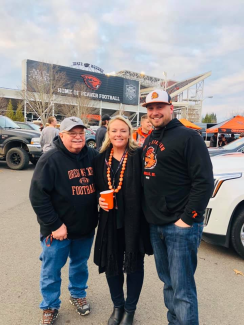 Gale Borde, left, with his daughter Melissa and son Ryan

Gale Borde is the original founder of Carcraft Auto Appearance Center, first opening the doors in 1976. With a dream of being self employed, Gale decided to open the very first auto detailing business in the area.

That same year, Gale went around to several auto dealerships in the Albany and Corvallis communities asking if he could showcase his auto detailing skills and get their business. In the 70s, auto detailing was still a relatively new industry and many of these dealerships sold their trade in vehicles "as is." But after Gale and his small crew detailed a few vehicles for the car lots, many of them signed on as his first customers. His very first account, Wilson Motors in Corvallis, is still one of Carcraft's top partners to this day.

Gale along with his brother Armand, who joined the company in 1979, continued to grow Carcraft's detailing operation from that point forward to where it has become arguably the biggest facility in the region.

Over the years Gale has expanded Carcraft's services to include a full service car wash, which opened in 1985, and he has also purchased two Chevron stations. One, Carcraft Chevron, is located adjacent to Carcraft Auto Appearance Center at the corner of Pacific Blvd. SE and Hill St. SE, while the other, Tom Tom Chevron, is located next to I-5 in east Albany.

Gale firmly believs in giving back to the community and has been very involved in numerous organizations throughout the years. He has been on the board of directors at the Boys & Girls Club of Albany since 1991 and has been heavily active in their annual fundraiser auction. In 2010, he was given the club's "Top Gun Award" for raising the most money for that years auction, with his donation totals coming in over the $33,000 mark.

He has also served on the Albany Planning Commission board, was a volunteer firefighter with the City of Albany for 15 years, and was very involved in the West Albany High School Booster Club in the 90s when two of his children attended the school. He served as the booster club president from 1992-96. From 2006-2014, Gale has served as the president of the Albany Area Beaver Huddle.

Gale is an avid Oregon State fan and travels to many of their away football and baseball games, as well as being a season ticket holder. He has three adult children, Tim, Ryan and Melissa, and six grandchildren.